Do you really understand what it takes to be a CEO? Insights from research.

Understanding the CEO can make a huge difference when communicating with one.  Is there a difference between large company and non-profit and bantum sized firm's CEOs?  Read more at

THE AVERAGE CEO
Graphic 1 shows the average of the 98 CEOs in the "I Opt" database. The average CEO's interest appears to center on creative options and on acting to secure them. 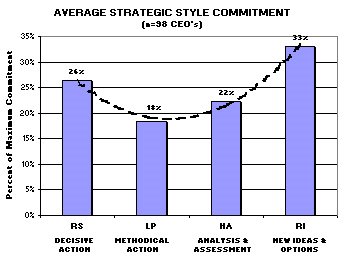 The average CEO's RI (Relational Innovator) style is dominant. It is geared to plotting a course for the firm. The CEO seizes on new insights and explores what they might mean to the firm. How a new insight might fit into the business system is quickly outlined. A collegial atmosphere tends to surround the CEO when operating in this mode. The CEO is open to changes, modification and elaboration. A vision of what might be is being created.

Not every issue yields to the RI strategy. Even when it does, the creative process will sooner or later be exhausted. The CEO then shifts to their next most favored strategy, the Reactive Stimulator (RS). At this point talk is over. It is now the time to "do." The CEO's focus changes from what to do to when it will be done. Collegial give and take is replaced by authoritative direction. Milestones are set and commitments sought. Focused action is the CEO's interest.

The world is not linear. Neither is the CEO's approach. They bounce back and forth between their preferred strategies. The combination catalyzes the adjustments the firm needs to navigate an ever-changing environment. The average CEO is a creative "doer."

The "take home" from the above is that if you want to engage an average CEO, bring something creative to the table. Attach some kind of action proposal (RS) to it and be ready to move if it is accepted. Having some analytical HA material available explaining why a course has been selected is probably advisable but it should not be stressed. The least important thing is laying out exactly how things are to be done.


NON-PROFIT CEOs
Sixteen of the 98 CEOs in the "I Opt" database head non-profit or government (state and federal) agencies. Non-profits face more nebulous missions than firms in the profit-sector. There is no clear "bottom line." Market feedback is slower and less clear-cut. These differences reflect themselves in the CEO's profile as shown in Graphic 2. 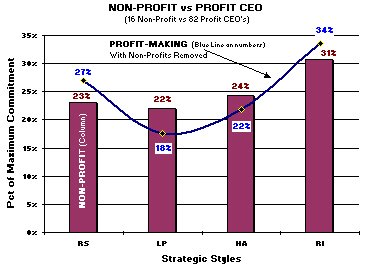 Non-profit CEOs favor the RI (creativity) strategic style but with a bit less intensity. Less defined goals make figuring out how a new idea "fits in" more difficult. A slower market feedback means less reliance can be placed on decisive action (RS). Too much damage can accumulate before a problem is known. In response the secondary strategy shifts to the analytical HA. Initiatives are more likely to be analyzed before being acted upon. Getting it done right is more important than being first to market.

All of the secondary strategies lie close together in strength. This is testimony to the nature of mission. The advantage of one strongly dominant secondary style is less clear cut. Like other CEOs the non-profit CEO is plotting a course in an uncertain environment. They are doing it more cautiously because they have to.

The "take home" from this mini-analysis is that the non-profit CEO can be engaged with creativity. However, the process of deciding what (if anything) to do will be longer. There are simply more things to consider. The balanced secondary styles mean that they may appear more "reasonable" than their profit-sector equivalents. They will seriously consider a wider range of proposals. The cost is elongated discussion and slower decisions.


LARGE FIRM CEOs
Larger firms tend to face complex issues and their decisions usually involve more stakeholders. The 82 profit-sector CEO's in the database can be divided by size. Twenty-three have revenue of over $100 million. This should result in a different strategic profile—and on average it does. 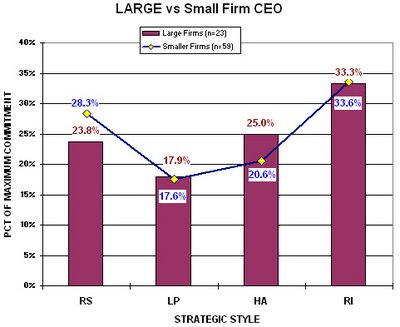 Graph 3 shows the style distribution with the non-profits excluded. Large-firm CEOs appear less willing to take decisive action and more inclined to subject initiatives to analysis before acting. Graphic 4 shows that smaller firms are more likely to have CEOs who are prepared to act more aggressively. Large firm CEO's are also prepared to act but none occupy an extreme position. This reduces the overall RS average of large firm CEO shown above in Graphic 3. 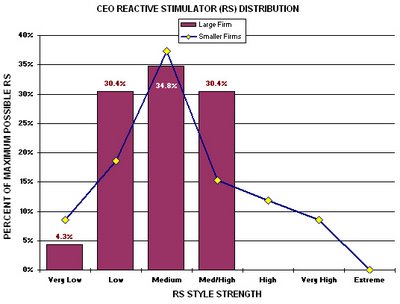 The analytical HA offers a similar story but on the other side. Graphic 5 shows that the large firm CEOs are seldom found at the "very low" HA level. This has been shifted to the "low" level. This move has the effect of increasing the large firm CEO's average HA score. In other words, the higher overall HA is due to fewer people in the very low category rather than to more people in the higher ones. 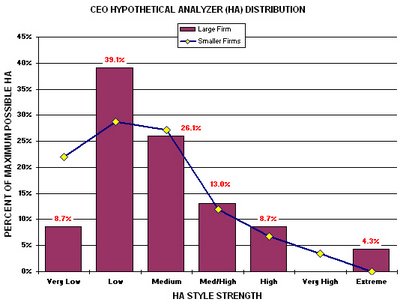 The difference in large and smaller firm CEO's profiles lies in the extremes. Large-firm CEOs are inclined to cluster in a band in the middle of the spectrum. It is likely due to the nature of the decisions being made. Complex decisions combined with multiple stakeholders probably favor moderate people in the CEO chair of larger firms.

Strategies that work for the CEOs of smaller firms are likely to be transportable to larger firms. The CEOs are equally interested in creative ideas. Their response to an initiative is likely to be more moderate but of the same character. In terms of decision-making information flows, what works at one CEO level will probably work at another.

I have taken this IOPT Test, with CEO results, and can help you understand this better if you need help.


Thanks Gary for the insight.

Posted by Eric Standlee at 5:29 PM

Promote Your Page Too


View my page on InHouston